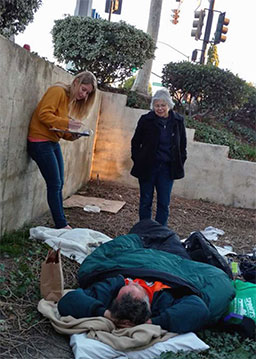 It all started with Mediterranean and Baltic. Not exactly the high-rent district on the Monopoly Board. As kids, we quickly learned that hotels on those two properties didn’t really enhance one’s cash flow. On the other hand, we had to deal with the luck (or lack thereof) of the throw of the dice.

Fast forward several decades. My mother was in a nursing home in southeast Los Angeles County, and I would visit her regularly. I always took the same route from Thousand Oaks, including the Hollywood Freeway through downtown Los Angeles.

Repeatedly, I observed individuals whose luck had run out. On the east side of the freeway just past Sunset Boulevard, there were individuals whose mattress or shelter consisted of large pieces of cardboard. Even today, Googling a map of the Hollywood Freeway shows tarps attached to a chain link fence to create some privacy and a sense of home.  That type of situation would make a hotel room on Mediterranean or Baltic seem luxurious.

During these trips, I heard God calling me to greater concern for my brothers and sisters in need of housing…and hope. What I observed along the Hollywood Freeway was a direct denial of human dignity. The homeless situation was not unique to Los Angeles. (And today, in 2020, the homeless population has increased to more than 60,000 in LA and Ventura Counties.) I observed homeless people in Thousand Oaks, sleeping in bushes or creating cardboard shanties near corners of buildings, especially during the cold winter months. They were obviously down on their luck. Action someday, I thought…

Shortly thereafter, in 1995, Joe Smolarski and Dan Hardy asked me to consider joining the Many Mansions Board of Directors. Having repeatedly been touched by the situation along the Hollywood Freeway, I really didn’t feel like I had a choice. Attending the first few board meetings, I felt overwhelmed by data, acronyms, and concepts beyond by comfort zone.  But I also quickly learned that advocacy was a huge part of our mission.

I remember a hearing before Thousand Oaks’ city officials when Many Mansions was negotiating to purchase the property now known as Esseff Village. The property at that time was an older motel in need of repair – probably similar to Mediterranean or Baltic. When one official said the proposed units would be too small, an older woman appeared from the audience and stated, “Those rooms won’t be any smaller than the back of my truck.”

Sometimes, we have faced a strong current of NIMBYism. So what do we want in our neighborhoods?  Shelter made from cardboard and tarps?  People living in cars or motorhomes? In 2019, I observed a homeless individual sleeping in the front yard of a local residence on a number of nights.

Unfortunately, the need for affordable and safe housing continues to grow, with our current waiting list well beyond 1,200 “households.” (As of 2019, that list grew to more than 4,000, with a potential wait time of 10 years—and with sad hearts, the board concurred that it was necessary to close the list.)

As Many Mansions now celebrates 40 years, we have incredible potential—new communities under development in Los Angeles County, an awakened populace with regular media reports on the homeless situation, and state and national attention on this social and economic blight.

How blessed I have been to work with incredibly dedicated and compassionate individuals—staff, board, volunteers, donors, city and housing authority officials. But most importantly, I have become acquainted with our residents who were once down on their luck, but who now enrich Many Mansions – and our local community – with the dignity and pride which are rightfully theirs.

Others may think that affordable housing corresponds to Mediterranean or Baltic. To our residents, Many Mansions is Boardwalk.