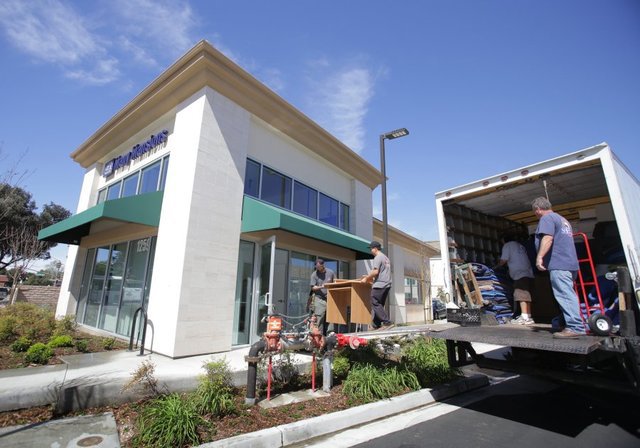 An excellent article was posted in Sunday’s Ventura County Star (link below) about Many Mansions, its office move and direction. Be sure to check out the timeline at the end of the article with pictures of our properties! Read the article on the VC Star’s website.

But the staff at Many Mansions believes leaving a hidden corner on Thousand Oaks Boulevard for a prominent spot on the same street could make a world of difference.

The housing nonprofit recently moved its offices to a new building with its blue logo on display for all drivers getting on or off the freeway at Rancho Road to see.

“The more prominent we are, the better,” said Many Mansions President Rick Schroeder. “There’s still many in our community who don’t know about us.”

That may be hard to believe considering the organization is in its 35th year and boasts 14 affordable housing projects across the county. But the nonprofit is starting a new chapter and it needs the attention of one group in particular — the private sector.

“Since redevelopment dissolved, it’s been hard to find that substitute,” Schroeder said. “We haven’t quite found a new formula to get projects built.”

One avenue is to partner with a potential developer on Thousand Oaks Boulevard. Four years ago, the city approved a plan that would allow housing to be built for the very first time on a stretch of the thoroughfare between Moorpark Road and Duesenberg Drive.

Schroeder said a potential retail developer may consider building housing as a way to receive tax credits, collect rent and diversify a portfolio. If the units are below market rate, Many Mansions could manage them.

Experts say with an aging population, there’s an acute need for senior housing, particularly in Thousand Oaks, where the housing stock is skewed toward single-family homes for the affluent. Thousand Oaks is also an aging community with 28 percent of its residents 55 or older, according to 2010 U.S. Census figures.

In a city of more than 127,000, there are about 1,100 units of housing deemed affordable. Of those, just 250 units are reserved for seniors, said Mark Towne, deputy community development director.

The need to house a growing number of low-income and fixed-income seniors could very well be an issue in the June 2 special election. Thousand Oaks voters are deciding between four candidates to fill a City Council vacancy.

Alyce Klussman, who is organizing a candidates forum for the Vallecito Homeowners Association, said the city has not been realistic when looking at the needs of senior housing. Klussman, who serves on a committee tasked by the City Council to draft a Senior Adult Master Plan, said many residents are aging baby boomers who didn’t save enough for retirement and are still paying a mortgage.

“They’re in a bind as to what kinds of housing is available. Thousand Oaks is not a friendly town for lower and lower-middle income families,” Klussman said. “There was once a great emphasis on open space and single-family homes. But we don’t have a lot of families in the middle income level with disposable income that need those big houses with the big yards.”

When the city incorporated in 1964, it was a bedroom community proud of its open space and proud of its separation from the San Fernando Valley.

“It was a refuge from the maddening life of L.A.,” said Douglas Tapking, whose father John Tapking served on the first City Council. “It was a commuter-oriented population.”

But as the city grew, the housing options did not evolve to keep up with demand.

Tapking, executive director of the Area Housing Authority of Ventura County, said the variety of housing didn’t keep pace because land is simply too pricey in the county.

“We’re no longer simply a bedroom community. People commute into our community to work,” Tapking said. “Our young people and senior citizens are moving away because they can’t afford to be here.”

Many Mansions hopes to change that despite the loss of redevelopment and the growing competitiveness of other state and federal grants.

The group has an eye on city property across from The Oaks mall on Hillcrest Drive. It would be Many Mansions’ first senior housing development. Plans to build 82 affordable units for seniors were scrapped in 2013 when neighbors objected.

A senior project across from the mall would need approval from the city, which has maintained a good relationship with Many Mansions. The city has been a partner in a number of past projects.

There is a possibility the council will eventually resurrect a housing trust fund that has a current balance of $1.7 million.

In 2008, the city set up a trust fund for affordable housing. Sources for the fund include developer fees, donations and money accumulated from legal settlements with developers.

But less than a year after the trust fund was set up, the city waived the developer fees that would go into the fund because of the recession. The council considered bringing back the developer fees in 2010, 2011 and 2012 but decided against it.

“We are now out of the recession,” said Councilwoman Claudia Bill-de la Peña. “We need to start funding that trust fund again.”

That would be good news for Many Mansions. Starting a new chapter means finding creative ways to fund its mission. That new chapter starts with the move to the new office building, which was a much appreciated donation.

Thousand Oaks Boulevard Storage kept the facilities in the back and Many Mansions gets to use the office space facing the street.