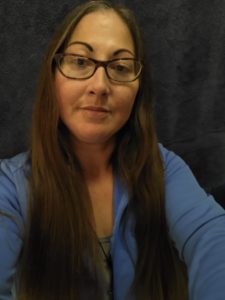 Rosanna Marie Allen was born in Ventura, CA in December 1983. She was named after the song “Rosanna” by Toto, and moved to Newbury Park with her mother, brother, and sister when she was 13 years old. Rosanna enjoyed taking care of animals since she rescued her first kittens as a kindergartener.

At the age of 18, Rosanna was diagnosed with Crohn’s disease, the first of many immune disorders to follow.  She went from being a straight A’s student in honors classes to being in danger of not even passing. However, Rosanna took matters into her own hands, completed her high school, and ended up graduating early with straight A’s.  Although Rosanna suddenly lost her father when she was 22 years old, she worked as a veterinary assistant for several years and even had her own pet sitting business for a few years until she moved to Oregon to get married.  However, Rosanna ended her marriage due to health issues and moved back home in 2008. She quickly found herself homeless, unemployed, and uninsured; she stayed in shelters as in need of serious medical care. Before taking time off to get her health back on track, Rosanna was attending Ventura College and was halfway through two degrees, a Bachelor in Business Administration and Psychology. Rosanna is in the process of plotting her return to finish those degrees.

Many Mansions has been Rosanna’s home for the past 11 years now. She is grateful to have a stable place to live, and to receive help from our case management program. Her mission in life is being a voice for the animals and a voice for the voiceless.